To exemplify a common approach to feminist performance art the American scholar Rebecca Schneider has studied the explicit body in performance art, and from a viewer’s perspective analysed the body’s function and the artist’s intention. From my point of view, Schneider and others need to factor in the different starting-points for the artistic work; namely to differ between intentions and conditions.   The final text [discourse] is thus short of a reflection upon how the explicit body reveals itself under no influence of the artist’s intentions, for instance, when an abnormal (critical of the norm) body is shown on stage, but not with the intention of thematically being abnormal or at all being a representation of “the body”. These conditions of art practice need to be further investigated when considering performance art as feminist. 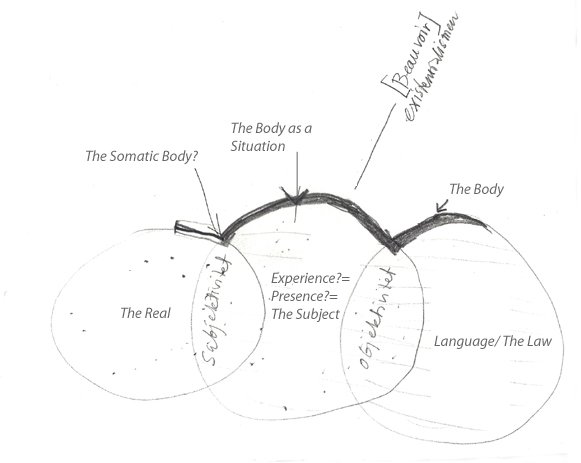 And as Peggy-Phelan puts forward that performance in itself manifests the Being between “the ‘real’ physical matter of ‘the performing body’ and the psychic experience of what it is to be embodied” , performance art seems ideal for exploring this relationship. [...]   Toril Moi’s entertaining analysis and criticism of Butler in her What Is a Woman [my translation]  encourages me to look closer at Beauvoir’s thoughts on the body as situated; experience according to existentialism and phenomenology

Fig. 2 is an attempt to imagine experience and presence  as a space between the real and the symbolic.

I have experienced the spectator not being sure of who to address when talking to “me” in a performance situation. Changes in way of address indicate that either the performance per se is seen as a subject versus my subject, or that my subject is what constitutes the work. In one way or another, I as a person am considered a part of the performance.

Processing, possessing and interpreting the gendered body  in performance art

Queries are sprung out of a desire to be included in a field historically excluding women; because such a field represents in its universality also an artistic validity. The artistic procedure therefore not only becomes a negotiation of what and how, but also of whom the artist is. Because this is not by me a chosen position I am ambiguous what regards calling me a feminist in an art context and whether the works I produce are first and foremost feministic. On the other hand, because this position is not chosen I cannot deny how my work is situated as and by necessity is feminist.

On the other hand feminism’s main criticism of modernism is that it claims to be universal but in practice operates to exclude. The art critic Amelia Jones  has also highlighted a feministic resistance of becoming a part of a postmodernist canon.  She motivates this with that once feministic particular works are included in such a canon, they adapt a more general meaning and are disarmed of their critical aspects. Jones also sheds light on the distinctly feministic criticism of the body in art as a reactionary project, which again undermines the subject’s particularity in relation to the general .

The gender theoretical project is hence contradictory in that it aims to avoid universal claims, and simultaneously, as part of a postmodernist criticism, to deny subjectivism. My works are a part of this conflict and it – the conflict – automatically becomes a part of my project.

”We will see that the concept of art, like that of the human subject, must open up to non-art and the non-subjective in order to situate art and the subject, together with all their claims to autonomy, on the line of fracture between reality and ideality, the possible and the impossible, the particular and the universal.”

To express the idea of the subject through an art philosophy, comparable to locating art in a space between reality and the ideal, is reminiscent of how Teresa de Lauretis considers it of importance to illustrate the lack of identity between real women and Woman .

In light of this thought, my artistic practice is an examination of that difference, and simultaneously an example of it, as if it were a location or space; an interim. My work and my performance becomes a location for the attempt. And the attempt as such becomes an interim for the narrative to take place.

Expressions for amateurism and the attempt are locations for negotiation and are valid as interdependent conditions for the normative. And so it is possible to treat the attempt as a form of critique of the normative and it would be in unison with discourses about the subversive. The attempt includes an ambiguity, and based on this, Linda Nochlin considers it feministic strategic: “Ambiguity as strategy [is] deployed in construction of manifest female self-representation.”

In my performances, silence, expressed through indistinct speech, signifies insecurity and ambiguity. This, in combination with the questions on amateurism or professionalism, colours my subject, as a woman amateur merely is seen as someone with double flaws. My personal experience is that attempts, in spite of being intentional, often come across as failures. Through the artistic practice I perhaps run the risk of being mistaken for a masochist when doing things that clearly will fail. The risk is precisely that the attempt becomes an expression within a personal desires’ flora. The obvious counter point of such a stance appears in discussing and pointing out presumed parameters of the personal and the staged in art practice and also to investigate terms for failure or the attempt already existing within canon. 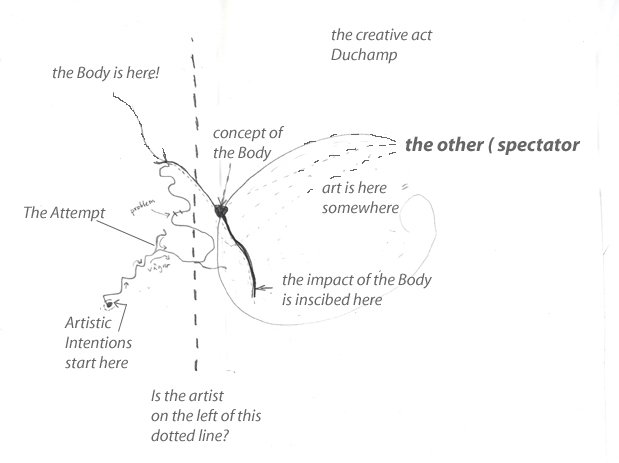 ... has thus evolved to be both an exploration and a staging of these risks of failure, creating a tension and stimulating thought about what failure is; ugly, over-whimsical, personal, incomprehensible, educational, political and tasteless ... read more...